Press release
The CPB Netherlands Bureau for Economic Policy Analysis (CPB) forecasts that the Dutch economy will perform moderately in the period 2012-2015 due to a combination of rising unemployment and low (household) consumption as a consequence of higher pension contributions, lower pension payments, restrictive government policy and falling house prices. 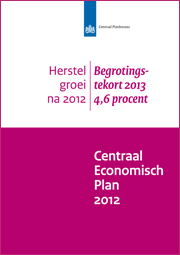 This is published today in the publication Central Economic Plan 2012 (in Dutch).

Through a number of small adjustments, amounting to a total of EUR 200 million, the rounded-off budget deficit (EMU balance) for 2013 is forecast to be 4.6 percent of gross domestic product (GDP), one tenth percent higher when compared to the draft figures published on 1 March 2012.

The current economic recession will continue until the second half of this year; and GDP is expected to shrink by ¾ of a percent in 2012. A slight recovery is forecast for the following years: a growth in GDP of 1¼ percent in 2013, and of 1½ percent in both 2014 and 2015. During this period, median purchasing power will decline and unemployment will rise, peaking at 545,000 in 2013; while the national debt (EMU deficit) is forecast to rise to 76% of GDP in 2015. However, the cautious recovery of world trade and the positive trend visible in the German economy offers the Dutch export market a glimmer of hope. Despite this, the size of the economy is not expected to exceed that of the first quarter of 2008 until 2014. Not since the Second World War has the Netherlands experienced a six year period in which there has, on balance, been no growth of the economy.

In addition to potential budgetary adjustments in the Netherlands, the factor causing the greatest uncertainty is the development of the European debt crisis. In the last few months, Europe has been teetering on the edge of a financial abyss. Currently, the situation appears slightly more stable, primarily due to the intervention of the European Central Bank; by means of its Longer Term Refinancing Operations (LTRO) banks can borrow money cheaply from the ECB. However, this has not solved the underlying problem of the weak European financial sector, a problem which could impact negatively on the real economy. 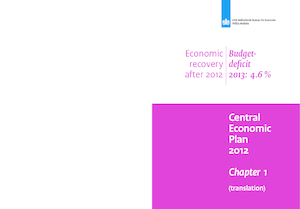 Four times a year CPB publishes short-term forecasts of the Dutch economy and the world economy. This is the first forecast of 2012, CPB's Central Economic Plan 2012. With this publication, CPB Netherlands Bureau for Economic Policy Analysis presents its analyses and forecasts of both the Dutch and worldwide economy. 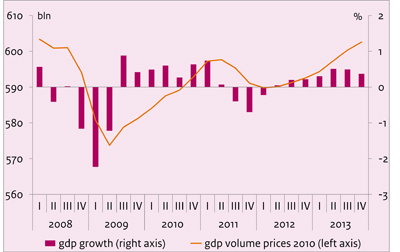 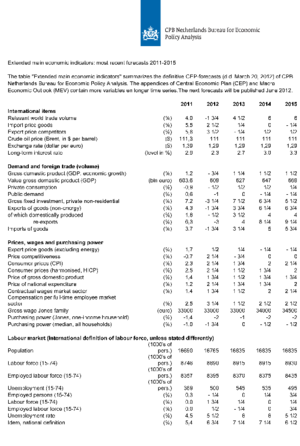