Wealth, gifts, and estate planning at the end of life

We show that gifts made to heirs before death are substantial and highly responsive to taxation. Therefore, characterising them and understanding their determinants is crucial for tax design. We use high-quality, intergenerationally-linked data on wealth, gifts, and medical expenses from the Netherlands. Exploiting variation in the timing of death, we find that the wealthiest half of singles (including widows) with children transfer over 10% of their wealth to their children in anticipation of death. Giving is highly sensitive to how heavily gifts are taxed, relative to bequests.

Using bunching estimation and exploiting the 2010 reform to gift taxation, we estimate Frisch elasticities of gifts to the net-of-tax rate between 9, for those giving around 27,000 euro, and 1, for those giving around 125,000 euro. Giving is concentrated among those singles who have grandchildren. However, the amount transferred does not vary substantively with the number of heirs and, within families, only slightly larger gifts are made to children who are less-wealthy or who have more children. These findings conflict with the predictions of a fully altruistic model of bequests. Rather, they are consistent with giving being driven by a warm-glow bequest motive that depends on net-of-tax transfers made and is operative for those with grandchildren. 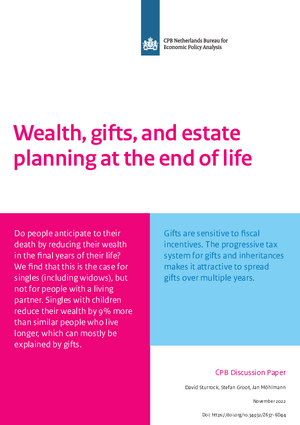 Wealth, gifts, and estate planning at the end of life
Pdf, 1 MB
Download