Press release
Main points from today's Macro Economic Outlook (MEV) 2012. The Outlook 2012 is only published in Dutch, but an English translation of chapter 1 is attached below. 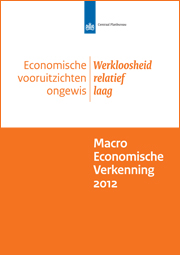 According to the Macro Economic Outlook 2012 (MEV 2012), published by CPB Netherlands Bureau for Economic Policy Analysis today, the Dutch economy is projected to grow by 1½% during 2011 and by 1% during 2012. The economic growth is largely attributable to exports. At this moderate rate of growth, unemployment will not decrease any further and is projected to stabilise at an average of 4¼%. Purchasing power will decrease in both forecast years. The forecasted budget deficit is diminishing rapidly, from 5.1% of gross domestic product (GDP) in 2010 to 2.9% of GDP next year. This relatively sombre picture is considered the most likely scenario based on current information, and hence the picture on the basis of which the budget has been prepared (the ‘baseline’).

The signals are flashing red for the global economy. In the highly developed economies, the slowdown of the growth rate was most pronounced in the first half of 2011 due to the increased uncertainty on the financial markets, budgetary reorganisation, the high oil price and the earthquake in Japan. These are compounded by the fact that the growth in imports in emerging markets is declining due to monetary tightening and capacity bottlenecks. Global GDP is projected to grow by 3½% during 2011 and 2012, compared with 4¾% during 2010. This will result in a substantial slowing down of the export growth rate for the Netherlands.

The most recent insights suggest that GDP in the Netherlands will grow by 1½% during 2011 and by 1% during 2012, significantly below the average of the previous 20 years (2¼%) and also below the potential growth rate of 1¾% forecast in the Economic Outlook 2011-2015. GDP in the Netherlands will not return to pre-credit crisis levels until the second half of 2012, meaning that the economy has merely been marking time for a period of almost four years. Dutch economic growth is dampened somewhat by the austerity measures and tax increases introduced by the cabinet (in particular in 2012), but is affected chiefly by the impact of the worldwide slowdown in growth that commenced in early 2011. The estimate has taken into account the impact of the substantial turbulence in financial markets that erupted at the beginning of August. The possibility of a new financial crisis has not been taken into account in the baseline, although such a scenario certainly cannot be ruled out.

Growth comes from exports
Economic growth in the Netherlands will come largely from exports in 2011 and 2012, with domestic expenditure only making a limited positive contribution to growth of ¼ to ½% point per year. Dutch consumers are feeling the after-effects of the crisis (loss of purchasing power, lost assets) and overall will not make any contribution to economic growth during 2011 and 2012. Public spending will inhibit the GDP growth rate next year. In the past four decades, public spending has only made a negative contribution to growth on one previous occasion, in 2004. The negative impact of public spending is not surprising given the extensive austerity measures introduced by the cabinet. Following a sharp decline in 2009 and a further decrease in 2010, business investments are projected to recover well in 2011, with a growth rate of 9¼%. This will not go all the way to offsetting the loss sustained in the previous years, however. Due to the fall off in economic activity in 2012, a decline in the growth of investments to 3¼% is once again anticipated for the coming year.

Government finances are improving, partly due to policy.....
In spite of a renewed slowing of growth, the public deficit will diminish further next year, chiefly due to austerity measures and tax increases. The deficit will decrease from 5.1% of GDP in 2010 to a projected 2.9% of GDP in 2012. This means that the deficit will have halved compared with the level in 2009 and will be below the ‘Maastricht’ ceiling of 3% of GDP for the first time since 2008. A relatively large part of the austerity measures will affect social security expenditure next year. Healthcare costs will continue to increase, albeit at a lower rate than in previous years. The tax and premium burden will increase in the projection period, from 38.8% of GDP in 2010 to 39.2% in 2012. This increase is entirely due to the effects of government policy and contributes to the reduction of the deficit.

.... purchasing power in 2012 is deteriorating due to policy
Inflation, which at 1.3% was still limited in 2010, is projected to be 2¼% in 2011 and 2% in 2012. The increase in inflation during 2011 is largely due to higher import prices. In 2012 domestic factors, such as rising housing rents, gas prices, indirect taxation and unit labour costs, in particular will push up the general price level. The increase in contract wages in the private sector is forecast to rise from 1.0% during 2010 to 1½% in 2011 and to 2% in 2012. Contractual wages develop with a lagged response to the increase in inflation and the reduction in unemployment.

An English translation of Chapter 1 is attached. 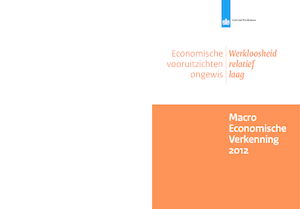 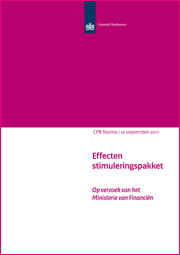 Four times a year CPB publishes short-term forecasts. This is the third forecast of 2011, CPB's Macro Economic Outlook (MEV) 2012. CPB presents its analyses and forecasts of both the Dutch and worldwide economy in the years 2011 and 2012. 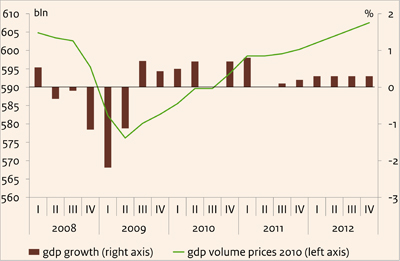