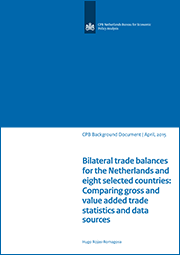 These differences depict the importance of the aggregate flows of intermediate inputs through these countries. On the contrary, for countries that are the international trade hubs –i.e. mainly as exporters of final goods– the differences between gross and value added balances are less important, but nonetheless can be informative for particular cases. For example, the much lower trade deficit of the US with China in value added terms than in gross terms is a well known international trade issue.

As part of the CPB project on the Dutch current account, the trade in value added analysis presented here provides relevant information concerning the Dutch bilateral trade balances. We find that its bilateral trade surplus with the rest of the EU is substantially lower (between half and one-third) in value added than in gross terms. Accordingly, its trade deficits with other global regions is also smaller in value added than in gross terms. This highlights the role of the Netherlands as a net importer of intermediate inputs from outside the EU that are later exported within the EU27. Additionally, the divergence between gross and valued added trade is even more visible at the sectoral level, where the movement of intermediate inputs flows can be better understood. This also implies that at the aggregate level –where sectoral flows are aggregated– many of the inter-sectoral intermediate input flows cancel out and the difference between gross and value added trade is smaller.

For most of the EU countries we analyse –the Netherlands, Germany, France, the UK, and Spain– the internal EU trade balances dominates the overall balances. In other words, the overall trade balance can be explained by the surplus or deficit of that particular country with the rest of the EU. This is also the case for Greece and Portugal.6 The only exception is Italy, where the trade balances with the USA, RoW and to a lesser extent Russia and China, are larger than the Italian trade balance with other EU countries. Furthermore, the Euro area block has had a roughly balanced external current account over the years, but internally there are very significant trade imbalances. In particular, the core countries (i.e. Germany and the Netherlands) have trade surpluses, while the peripheral countries (i.e. Spain, Portugal, Greece) plus the UK and France (only in more recent years) have trade deficits. This remains the case even when the value added trade balances are less sharp than the gross trade balances.

Trade in value added statistics can also be useful to analyse changes in international trade networks over time. In particular, the WIOD database has a continuous series from 1995 to 2011. However, we find that the WIOD data has less variation over time than the OECD trade data, and accordingly, the pattern of bilateral balances does not change much over time. Even though in 2011 we do observe some changes in the trade patterns. The GTAP database, on the other hand, has more variation on the patterns of bilateral balances, but it is limited to a sample of few years and thus, it is less suitable to analyse changes over time.