Slight growth 2014 will not yet lead to additional consumption

Persbericht
A slow climb out of recession is projected for the Dutch economy, with a ½% growth next year. Recovery of the labour market will take a little longer, with unemployment projected to increase to 7½% in 2014. Inflation, with 1½%, will remain below the target level of the European Central Bank, while median purchasing power increases by 1%.

The slight growth in GDP (gross domestic product) of 0.1% in the third quarter of 2013 is expected to continue next year. Annual growth is projected to be ½% for 2014. This is particularly due to increases in exports and investments. Consumer spending next year will continue to decline further, mainly as an after-effect of the income reduction of 2013 and the decline in wealth of the past years. The average increase in contract wages in 2014 is expected to equal inflation. Purchasing power is projected to increase next year, due to a lowering of the tax rate of the first tax bracket, a drop in health insurance premiums and lower pension fund contributions for civil servants.

Labour market recovery is not on the cards yet. Unemployment in 2014 will continue to rise and, on average, will involve 7½% of the working population. There will be no turn around yet, as employment is projected to decline also in 2014, albeit at a slower pace than in 2013. The decline for next year is estimated at ½% in the market sector and 1½% in the public sector. At the same time, there will be an increase in the number of people who would like to enter the labour market, although this increase will be smaller than in 2013.

Inflation in 2014 will even out at 1½%. The main factors contributing to a rise in consumer prices are the relatively large rent increases and price increases of imported consumer goods and services. As in the rest of the eurozone, inflation in the Netherlands also will be lower than in 2013, partly because the October 2012 increase in VAT will no longer affect inflation.

The EMU balance will even out at 3.1% in 2013 and 3.3% in 2014. The deficit will be attenuated by sizeable spending cuts and burden increases that were decided on in the government agreements of both Rutte Cabinets, the Government Agreement 2013 (Spring Agreement), and the six-billion-euro package of measures of last autumn. The increase in the expenditure on health care is lower than projected earlier. This has enabled a reduction in health care premiums, but has little influence on the EMU balance. 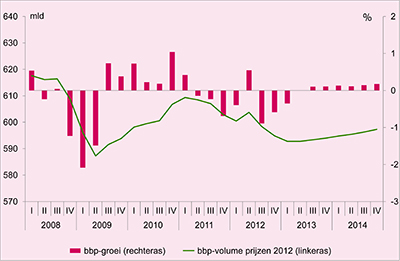 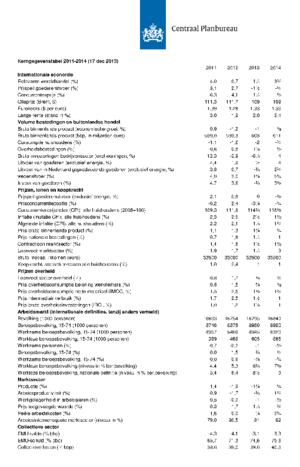 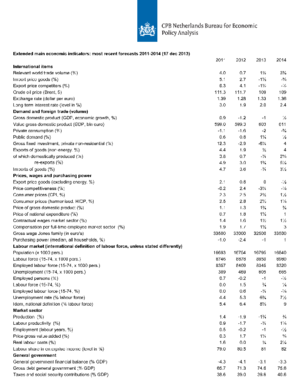